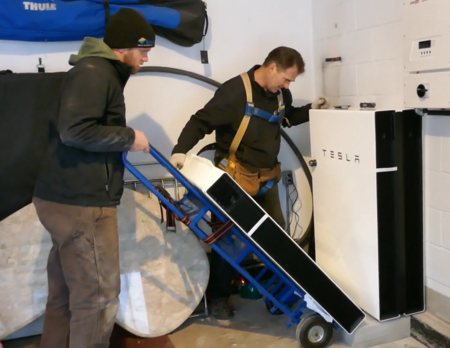 President Steve Dyck chats with a Guelph Solar client in Oakville, Ontario during the installation of three Tesla Powerwalls, including a Powerwall unboxing. Designed, engineered and installed by Guelph Solar, the residential system has 27 kW of PV solar panels, two inverters and three Tesla Powerwalls. Steve Dyck calls it “incredibly elegant technology.” Each Powerwall is 13.5 kWh and the homeowner estimates three of them will power his home for 40 hours if the grid were to go down, including charging his three Tesla electric vehicles (not taking into account that the solar system would recharge the Powerwalls during that time). Steve Dyck also demonstrates the home’s grid configuration. He talks about the Tesla Gateway and how it monitors and intelligently routes power between the Powerwalls, the grid, the PV solar system and the requirements of the household.