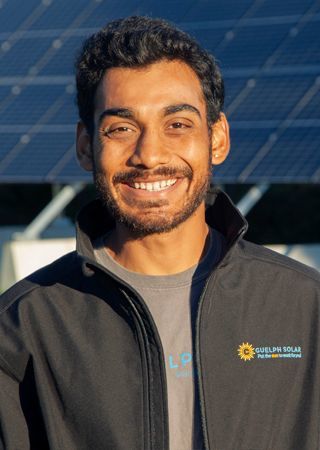 Rohan has worked previously with a solar company in India as a production manager and a field engineer. He previously worked on a 250m long solar bridge in Vadodara, India. This solar-covered bridge has 3024 solar panels installed on it, which produce 982.8 kWh units of energy. Rohan has a Bachelors in Electrical and Electronics Engineering, and received a Diploma as a renewable energy technician. Rohan describes, "Working at Guelph Solar has given me exposure to the solar market in Canada". He has also developed problem solving and leadership skills while at the Guelph Solar. The aspect that draws him most to the solar industry is the growing demand for solar power and green energy. Rohan has also played cricket and volleyball at state levels in the past.